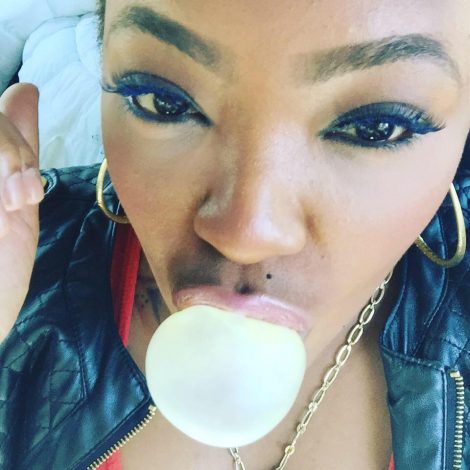 Typheni Writer Born and raised in Dundalk, Maryland.  She Started singing at the age of 7, but in her earlier years loved singing “Tomorrow” From the classic movie “Annie”.  Growing up in a family where almost everyone around her had the talent to sing she soon realized she possessed the same ability.  Although she was never professionally train in her craft she ultimately received her training from her family and father, who also is a singer.  Years of just singing in the living room to greats such as Earth, Wind, and Fire, The Temptation, Whitney Houston, Berry White not to mention Toni Braxton .  At the age of 11 she formed a singing group with her two best friends “S.E.T” was there name consisting of members Shanwtina, Ebony and Typheni.
As she entered high school she joined the choir,   performed in talents shows and soon became known as “The Singer”.   She won her High school class Most Likely to Become a Celebrity Award.  Typheni started entering and dominating talent shows in the Maryland area,   soon getting the attention of local production companies.  With her parent’s right by her side,   she was told that she could pursue her dreams after she graduated high school.  It made her want to sing even more.
After graduation Typheni started working and soon started traveling, doing talents shows everywhere. She met a Lady by the name of Jane Harley who only introduced herself as the owner of Kemit Production.  Mrs. Harley was amazed with Typheni raspy warn tone vocal performance that 8mths later Mrs. Harley called Typheni and  offered her a opportunity to perform at the Apollo.  To give a a feel for the crowd and the stage Typheni performed on Wednesday’s “Amateur Night” where she performed “Angel” by Anita Baker and came in second place, with that performance she got the attention of the directors and earned a spot on “Show Time at the Apollo” where she won and returned for the next season.

Getting the attention and working close to producer /engineer Don Medina of Madd Ruff Productions, traveling between Atlanta and Chicago she then was introduced to Songwriter Manuel Seal Jr. ( Co-wrote and writer of songs such as Mariah Carey “Always Be My Baby” and “My Boo” Usher ft. Alicia Keys) and started referenced songs for him.
After a five year hiatus of being just a singer, Typheni listened to strong advice given to her from working with Producer Darryl Pearson.

Who has worked with artist such as Timberland, and Mya, she focused on her artistry, business, and writing skills.  She returns delivering old school feel with a new sound, writing and working with Producers M16 who Produced hits such as “Lollipop” Remix, and “Duffle Bag Boy” by Lil Wayne, Rich “Neeze” Shelton of 1 Up entertainment produced artist such as Keyshia Cole, Mya.  Writing and working with Redd Stylez (co-writer of “Jupiter Love”) on Try Stylez “ready” album, Typheni is well on her way to becoming a house hold name. Today the bright-smiled artist describes her music as a cross between R&B, Alternative, and Soul. She even embraces and infuses Hip Hop.

Featuring on the mix tape of a Drum-Squad artist Krystyle featured with Gangsta Boo “Take U out”.  Working with Hip Hop artist from the East to the West coast, her writing has taken her a lot further.   Having recently been featured in a funeral scene in the movie Family, Faith and Money a 2010 Independent Film produced by Frankie Jones, the artist has also ventured into acting. Her ear grabbing voice can be heard and is listed on the movies theme song “Family, Faith and Money”.