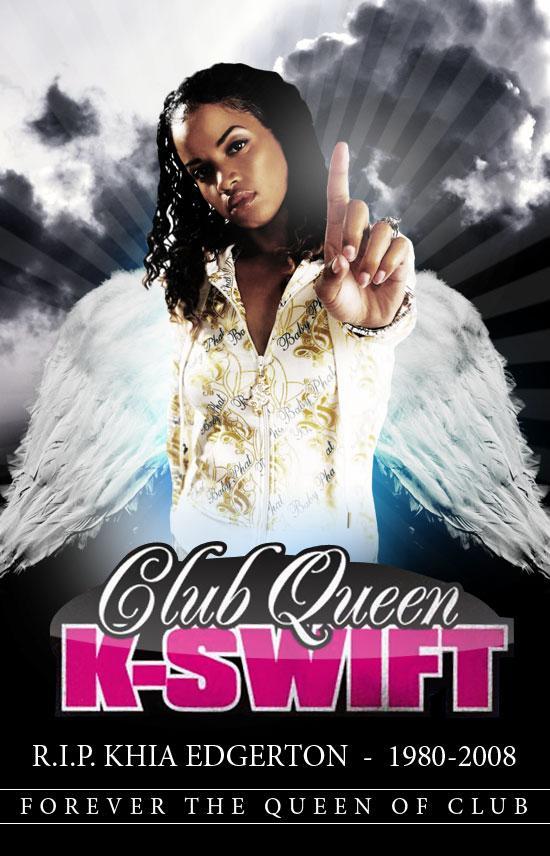 Khia Danielle Edgerton (October 19, 1978 – July 21, 2008), better known by the stage name K-Swift, was an American DJ, MC,radio personality and entrepreneur. She began interning at 92Q when she was 18, and worked her way through the ranks at the station until she earned a co-hosting position in 1998.The show,”OFF THE HOOK RADIO” along with her co-host Squirrel Wyde is the number one radio show in all of Baltimore. Along with DJing at all of the popular clubs in Baltimore, as well as throwing her own parties, K-Swift owned and operated Club Queen Entertainment, a roster of well known partying dj’s and hosts which had a hold on the scene and still a hold on the prominent parties in the Baltimore area. K-Swift also began a Graphics Company and the Next Level Management Company, and maintained a record pool and sold her mixtapes online. K-Swift released her discs through Baltimore based company, Unruly Records (as well as Next Level). Her albums were so popular and had such an enormous following in the area, that she outsold mainstream artists

On Sunday July 20, 2008, just a day after she performed at Baltimore’s Artscape, K-Swift hosted a pool party at her house. During the early morning of Monday, July 21, K-Swift reportedly jumped into her above ground pool. Police reports state that there were about seven people in the pool at the time. When she did not resurface, she was pulled out and placed on an adjoining metal frame deck. K-Swift was later transported to Good Samaritan Hospital where she was pronounced dead.